Quickly and stealthily and dressed in black, they walk carefully across the stage, avoiding any obstacles in their way. One grabs a bench and silently maneuvers it off the stage. Others wait backstage, ready to position new props into place. This is all done in a matter of minutes, the audience never knowing the identity of the diligent workers. The lights on stage come back up, the stage has been transformed, and the show continues.

Just last weekend, Westlake Christian Academy presented The Pirates of Penzance. If you attended one of the three performances, I know you would agree that our student body possesses incredible talent. The directors Paula Coombe and Jeannie Ptasienski, along with the student actors, worked hard to create an outstanding production. What many people do not know, however, is that the play also gives other students opportunities to use their God-given gifts, just not in ways that are seen by everyone.

To put on play like The Pirates of Penzance requires a myriad of volunteers to use their abilities behind the scenes. Many students were here a couple of hours before the performance to help with hair and make-up. Student volunteers were on hand to run the sounds and lights. Others worked to assemble the stage and to paint the backdrops. Parents coordinated meals for the cast and crew and helped with costumes and props. 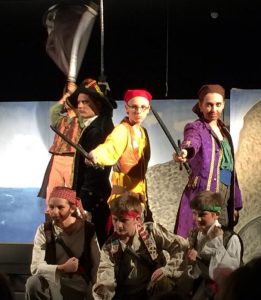 One student in particular I’d like to highlight is senior Carlos Gil. Carlos has been dedicated to the drama department for four years now. Most people, however, would never know how involved this young man is. For his four years of high school, Carlos has worked behind the scenes, moving props, getting the stage ready for each performance, fixing things last minute, covering windows, and being on hand for anything that needed to be done. In working backstage with Carlos over the years, it has been obvious to me that he has the spiritual gift of helping and service. Carlos exemplifies what Paul wrote to the church of Corinth when he said “God has placed in the church… gifts of… helping…”.   (1 Corinthians 12:28)  It is such an encouragement to see Carlos using his God-given gift to help other Christians. When asked why he enjoys working backstage, Carlos replied “Because it is important work that we do and it is a lot of fun.” He doesn’t mind that most people will never know all the hours that he has put into the production, he just enjoys using his gift.

Another student who worked diligently during the play was junior Angela Wintering. Angela worked closely with Mrs. Sandy Slota to get the costumes in order and then check them back in at the end of each night. Again, this was work that nobody would notice. When asked about her role in the production, Angela said “I liked being involved in the play even if I wasn’t on stage. I had to be organized, but I enjoyed it.” During the week of the play, Angela came early and stayed until the end of each night. Angela’s gifts of order and detail were well utilized during the play.

One of the many reasons I love Westlake Christian Academy is because students have numerous opportunities to use their gifts for the Lord. Even students with less obvious gifts can use their talents to serve. We are training our students to help in different ways so they can serve the Lord later in life and even now. Each of our students is unique and it is an incredible thing to see each student using his or her abilities to contribute to all areas of the school.